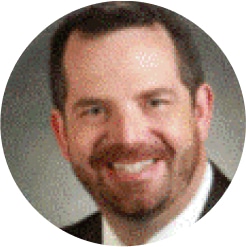 Michael J. McAvoy, DO, is a board-certified Otolaryngologist who joined the Ear, Nose and Throat Surgical Associates team of physicians in August 2009. Dr. McAvoy completed his residency training in Otolaryngology and Facial Plastic Surgery at Henry Ford Macomb Hospital-Warren Campus where he served as Chief Resident. He obtained his Doctor of Osteopathic Medicine degree in 2004 from the Kirksville College of Osteopathic Medicine. Prior to medical school, he was involved in research at several major universities and the National Institutes of Health.

His work has been published several times including in a leading ENT journal. Dr. McAvoy received his undergraduate degree from the University of Wisconsin-Madison. He is interested in sinus disease, pediatrics, and facial skin cancer. Additionally, he looks forward to providing aesthetic facial surgery to the region. Dr. McAvoy grew up in Neenah, and enjoys spending time with his wife, Leah, daughter Meghan, and son, Ian.

Curious about specific treatment options or ready to schedule an appointment? Contact us to learn more today! If you are experiencing a medical emergency, please call 911.